Lending a hand to those in need, young volunteers take time to serve the community | Deseret News.

TAYLORSVILLE — Clementina Laufou kept peering out of the window of her home, telling a group of young adults they had already done enough, but the group just kept on working. END_OF_DOCUMENT_TOKEN_TO_BE_REPLACED

Found this on CBS website, linked from WIRED blog.

A Nation Of Potty Mouths

A Brief History Of Swear Words In America

(CBS) It all started with “Gone with the Wind” and Rhett’s not-so-fond adieu: “Frankly ,my dear, I don’t give a damn.”

His vulgarity was shocking at the time, but damn, that was nothing compared to what passes for entertainment today, where a movie is named “Meet the Fockers” and every Sunday night we invite “Desperate Housewives” into our homes, comments CBS News correspondent Steve Hartman.

Heck, even our born-again president swears, or did at least once that we know of. END_OF_DOCUMENT_TOKEN_TO_BE_REPLACED

Subtly showing its hand, the Times made sure the article was a very long one. Because, like many other bastions of journalism and literature, it is a newspaper that chooses to uphold certain standards.
END_OF_DOCUMENT_TOKEN_TO_BE_REPLACED 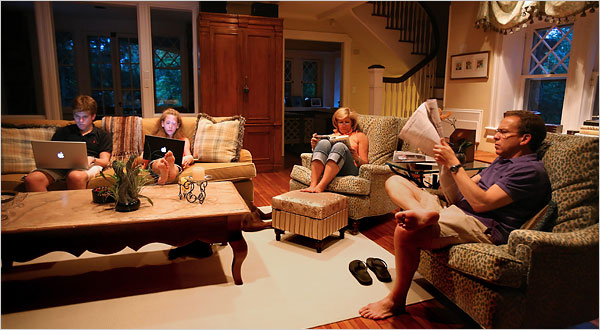 Her mother, Deborah Konyk, would prefer that Nadia, who gets A’s and B’s at school, read books for a change. But at this point, Ms. Konyk said, “I’m just pleased that she reads something anymore.”
END_OF_DOCUMENT_TOKEN_TO_BE_REPLACED