Several grass-roots groups were established on Facebook in early 2009 calling for the cancellation of all student loan debt under the theory that this will stimulate the economy.

Most noteworthy is the group Cancel Student Loan Debt to Stimulate the Economy (see also www.forgivestudentloandebt.com) founded by Robert Applebaum, a New York attorney. This group has grown to have more than 220,000 members in just seven months. Another group, Stimulate the Economy — Forgive Student Loans is running a petition drive and has collected more than 40,000 signatures. END_OF_DOCUMENT_TOKEN_TO_BE_REPLACED

The Difference in Being Frugal, and Being Cheap

What is the first word that comes to mind when I say the word frugal. Cheap? If so, you are not alone. Most people tend to incorrectly associate being frugal with being cheap, when in fact they are two entirely different ways of looking at financial life. Dictionary.com defines frugal as “prudently saving or sparing; not wasteful.” The same online dictionary service defines cheap as “stingy; miserly.” But the differences don’t stop with the words’ definitions. Frugal people spend, give and consume a little differently than their”cheaper” counterparts.

Followers of frugality generally believe in being lightweight consumers of resources, whatever those resources may be. For instance, many frugal people prefer to make meals from scratch rather than paying several times for the cost of equivalent foods at a restaurant. Cheap people also frequently look for deals, but still could be heavy consumers of resources. Many cheap people will buy things on sale just because they are on sale, not because they really need them. Frugal individuals hunt for sales, too, but buy only enough to live on for the immediate future. END_OF_DOCUMENT_TOKEN_TO_BE_REPLACED

Found this article on MSN Money.

Your lifestyle may hurt credit score

Lenders might be monitoring your behavior via your credit card spending — and certain purchases could cost you. By BusinessWeek

Most borrowers know a late payment or high outstanding balance can hurt their credit. But what about frequenting a massage parlor, retreading a tire or visiting a marriage counselor? Such activities count, too, according to a suit filed June 10 by the Federal Trade Commission in Atlanta federal court against card issuer CompuCredit. END_OF_DOCUMENT_TOKEN_TO_BE_REPLACED

Found this article on Wise Bread, it’s an interesting way to look at money:

Money Metaphors (You wouldn’t punch a kitten, would you?) 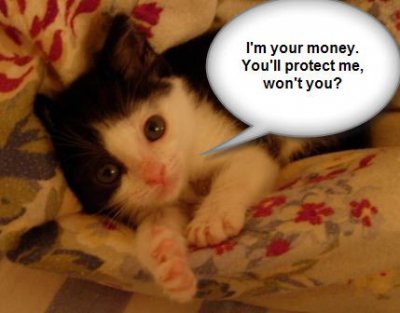 My boyfriend and I occasionally (at least weekly) argue over money. I like to spend it, he likes to save it. We have fundamentally different ways of looking at money. He carefully researches purchases and buys high quality goods. I like to buy the first thing that catches my eye. He spends money when he has some extra to burn on things he needs, I spend money to make myself feel better, regardless of whether I have the actual cash to blow. END_OF_DOCUMENT_TOKEN_TO_BE_REPLACED

Financial term of the quarter:

This is business/financial lingo for assimilation. It refers to an involuntary merging of two entities, where the desires of the individuals are subjugated to the needs of the many, for the benefit of the whole. (aka: communism)

The focus of the financial info we have for you this quarter is access to our subscription to the Investors Toolbox website. END_OF_DOCUMENT_TOKEN_TO_BE_REPLACED